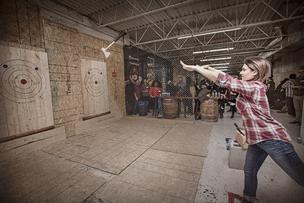 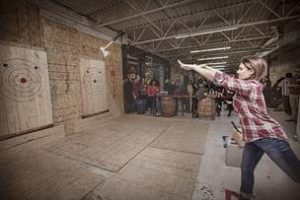 If you enjoy drinking beer and hurling axes, there will soon be a place for you to do both in Minneapolis. Bad Axe Throwing, an axe-throwing chain based in Canada, has reached a deal to open an 8,000-square-foot location at 2505 Kennedy St. NE, company spokeswoman Melanie St. Amour said.

Founded by CEO Mario Zelaya in 2014, the Bad Axe concept is straightforward: It’s a bowling alley but with axes and targets instead of balls and pins. Your group brings it

s own beer and food, learns how axes are properly thrown by a professional, and then you start throwing axes at dartboard-like targets. The Chicago Tribune, in a profile of the business, has a video to show how it’s done.

“We’re going to cities where people are looking for something unique and that want to try something different,” St. Amour said.

Bad Axe Throwing will apply for a liquor license to allow beer and wine at the facility. Hard alcohol will not be allowed — and, for those of you with your own axes, you can’t bring those either.

Okay, is the concept safe?

“It’s totally safe and we have professional coaches guiding you every step of the way,” St. Amour said. “We’ve never had any accidents on site. The coaches stand by you side by side and show you how to throw.”

Bad Axe Throwing has nine locations in Canada and a handful of U.S. locations in cities like Denver, Chicago and Washington D.C. The Minneapolis location will be its largest spot to-date (its other spots are between 1,500 and 5,000 square feet). The company also plans to have a full lounge area stocked with TVs and retro Nintendo games.

The company will seek out a local general contractor and mural artist for the project. Bad Axe Throwing worked with Sam Svendahl at Colliers International Minneapolis – St. Paul to find the location. It’s aiming for a November opening.