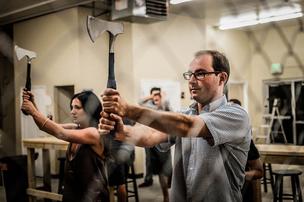 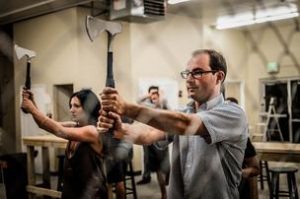 Bad Axe Throwing in Minneapolis will have 10 throwing lanes, each with two targets.

A place to gather with friends, family or co-workers and throw axes at targets will soon open in Northeast Minneapolis.

Bad Axe Throwing, an axe-throwing chain based in Burlington, Ontario, is slated to open an 8,000-square-foot location at 2505 Kennedy St. NE, Suite A, on March 10. This is its first Minnesota location, but 17th overall.

Founded by CEO Mario Zelaya in 2014, the Bad Axe concept is straightforward: It’s like a bowling alley, but with axes and targets instead of balls and pins. Your group learns how axes are properly thrown by a professional for 15 to 30 minutes, then you start throwing them at dartboard-like targets.

Bad Axe Throwing Minneapolis will have several throwing lanes with two wood targets on each.

You’re allowed to bring your own beer and wine — but no hard liquor — to Bad Axe Throwing. The location eventually will have its own bar serving local craft beers and a few wines, but that’s pending a liquor license.

I asked Sable if axe throwing was a safe activity — especially with beer potentially being involved. He said the company has never had a serious injury and that its a safe activity for nearly all ages, as long as safety protocol is followed closely. You do have to sign a waiver online before participating.

“That’s what our coaches are here for, and if you follow [instructions] to a T, you’re safe and will pick it up quickly,” Sable said.

The company targets groups ranging from corporate retreats to bachelor or birthday parties. Prices for Bad Axe Throwing are $39.25 per person for group bookings and $20 per hour for walk-ins.

The company declined to give an annual revenue projection for the Minneapolis location.

Bad Axe Throwing has nine locations in Canada and a handful of U.S. locations in cities like Denver, Chicago, and Washington, D.C.