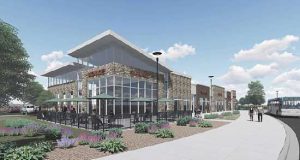 Designers had to go back to the drafting board several times for Plaza 66, a single-story, 10,100-square-foot building planned by Eden Prairie-based Interstate Development. (Submitted rendering: DJR)

After about two years in the works, Interstate Development is ready to move on Plaza 66, a new retail development in Richfield near the intersection of Highway 77 and 66th Street. Interstate General Manager Victoria Perbix said the company will break ground later this month at the 1.25-acre site, which is bounded on the north by 66th Street, on the west by 16th Avenue South and on the east by a portion of 17th Avenue South. Plaza 66 will go up near another new development that will soon be underway, a $60 million apartment complex called The Chamberlain.

The Interstate development entails a single-story, 10,100-square-foot building with space for four tenants. Perbix said one tenant is already signed, the sub chain Jersey Mike’s. Other tenants will likely be a full-service restaurant and a coffee shop. The project took time to come together because of an extended back and forth between the developer and the city over the design, said City Manager Steve Devich. “The first few iterations of the design weren’t really what the council was looking for,” Devich said. “It took a while for us to iron out, but in the end the design turned out to be really attractive.” He said that the complexity of the real estate deals involved lengthened the timeline as well.

On Aug. 1, Eden Prairie-based Interstate closed on six parcels on the 6600 block of 17th and 16th avenues, according to certificates of real estate value made available on Aug 11. Three lots — two vacant parcels and one single-family home — were purchased for $450,000 from the city of Richfield’s Housing and Redevelopment Authority. Interstate also paid three individual homeowners $310,000 each for their properties, all single-family homes built in the early 1950s. All together the sales detailed in the CRVs totaled $1.38 million. Perbix declined to give a total purchase price on the real estate transactions, and likewise did not wish to disclose the project’s development cost. Plaza 66 will be move-in ready by Jan. 1. Continuum Construction of Bloomington is the general contractor. Minneapolis-based DJR did the design work. The new retail comes as big changes are taking place on the adjacent 66th Street corridor in Richfield. Construction is underway on a $63.8 million reconstruction of 3.4 miles of 66th Street between 16th Avenue and Xerxes Avenue.

Construction will wrap up in 2019. Crews are removing pavement and utilities between 14th and 15th avenues. That portion of the street was fully closed in mid-August. The overall project required the removal of 19 homes.