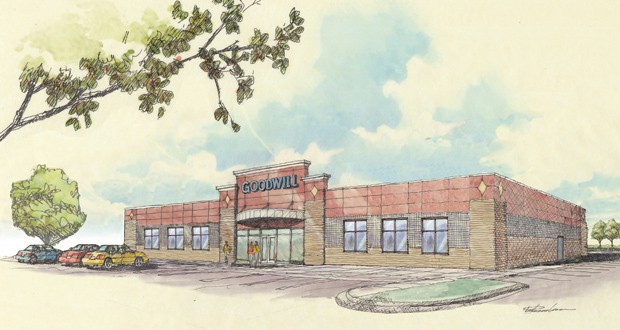 Editor’s note: Minnesota Snapshot reports interesting sales and development projects happening throughout Minnesota. The transactions are based on the certificates of real estate value filed with the state Department of Revenue, copies of which are available here. Other items may come from government agendas and news releases. 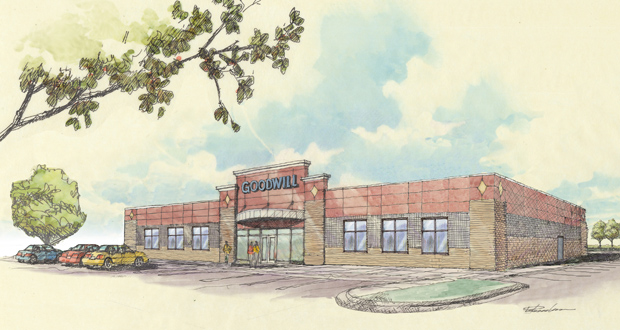 This rendering shows the typical design for new Goodwill retail stores, including those under construction in Shakopee, Faribault and Hutchinson. (Submitted image: Goodwill-Easter Seals Minnesota)

St. Paul-based Goodwill-Easter Seals of Minnesota is continuing its push into new markets with a store under construction in Faribault.

IP II Faribault LLC, an entity related to St. Paul-based developer Interstate Partners, closed March 2 on the sale to Four Ks LLC, a private investor in Faribault, according to a certificate of real estate value. The sale included a nearly $1.1 million down payment and a new mortgage. The price works out to $192.13 per square foot.

The Faribault store is the latest in a string of retail building projects the nonprofit has completed over the past several years to expand its reach and update its look. More are set to open before the fiscal year ends in September, increasing the retail network to 38 neighborhood stores, two Second Début boutiques, two Goodwill Outlets and one Gina + Will campus resale shop near the University of Minnesota.

The nonprofit usually works with a developer to develop its buildings, then sells them to investors and signs long-term leases.In a few cases, it has retained ownership.

“The mission is what drives everything,” said Mary Beth Casement, director of retail marketing.

Goodwill’s mission is to provide job training, placement and related services to people in need, and demand for those services continues to grow, she said. The retail operations are the key funding source for those programs, and better, more fashionable stores generate more money, she said.

In recent months Goodwill has opened greater Minnesota stores in Alexandria (in November) and Monticello (in January). It also opened a new outlet and distribution center in Brooklyn Park in February.

Most stores are one-story buildings with about 18,000 square feet of space. Goodwill used a two-story design for its new 33,000-square-foot flagship store that opened Feb. 28 at 1239 University Ave. W. in St. Paul.

That store replaced the retail store in the nonprofit’s headquarters at 553 Fairview Ave. N. The empty space in the headquarters building is undergoing renovations to create a 13,000-square-foot sales floor for Goodwill’s outlet operation, now housed in a slightly smaller industrial space at 2505 University Ave. W.

The existing Shakopee store is slated to move in March into a new building under construction at 4450 12th Ave. E., and Hutchinson is set to get its first store after construction wraps up in the fall.

No other stores have been announced, but the growth is far from over.

Goodwill officials are working now on plans for 2016, Casement said.

Impressed by the condition of the family-owned property, Mark Rodenwald of Waite Park led a small investment group in the purchase of the 32-unit Wood Creek Estates apartments in St. Joseph more than a decade ago.

The buyer this time is Wood Creek Estates LLC, an entity based in Princeton, which paid $1.216 million to Rodenwald’s group, SAJ Properties LLC of Waite Park. The sale closed Feb. 24, according to a certificate of real estate value made public March 3. The deal included a $5,000 down payment and a new mortgage. The sale price works out to $38,000 per unit.

The group had sold the property in 2007 for $1.5 million, according to property records. The sale was a contract for deed, Rodenwald said, explaining that the group had to take the property back in 2012 and invest more money in the three 1966 buildings to reverse the neglect during the failed contract.

In the end, owning a relatively small apartment complex in a small community required investing more than money, Rodenwald said.

Owners need to manage their own properties – and the phone calls and late-night emergencies — or acquire enough properties to hire staff.