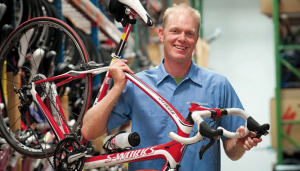 Erik’s Bike Shop Inc. is relocating its corporate headquarters, warehouse and distribution center to Minneapolis from Bloomington this month.

Erik Saltvold, founder and CEO of the 31-store retail chain, said the new location at 550 Kasota Ave. SE. in Minneapolis’ Como neighborhood made sense for both the business and its employees. At 100,000 square feet, the new warehouse gives Erik’s more than twice the space it had in Bloomington.

“Our business has been growing and we needed more space, and we wanted to be in a place that had better biking infrastructure, better options for our staff in terms of cycling infrastructure that’s in place,” Saltvold said, adding that many of his employees regularly bike to work.

Saltvold started repairing bikes at age 13 and opened his first store in Richfield in 1977. Erik’s now has stores in seven states, selling and repairing skis and snowboards in addition to bicycles.

The move brings dozens of jobs to Minneapolis. Saltvold said the headquarters workforce fluctuates throughout the year, from about 70 to 110 employees.

The space will also be used for bicycle assembly and handling online orders.

Like bicycle shops around the country, Erik’s locations saw demand skyrocket during the pandemic. Saltvold said it was among the bigger of the occasional booms to hit cycling retail during his four decades in the business.

Market research firm NPD Group tracked a 31% increase in U.S. bicycle sales to $1.3 billion for the first quarter of 2020. Saltvold said his shops remained “extremely busy” through the summer, both for sales and repairs.

“We think there’ll be a shortage there if the demand increases like it did on bikes,” he said.

Saltvold, who doesn’t share revenue figures for his privately held company, said he expects the effects of this latest cycling boom to linger as more first-time or first-in-a-long-time cyclists make the activity part of their routine.

“We think a lot of those people loved it and have become cyclists. … We’ve very bullish about what the industry looks like,” he said.