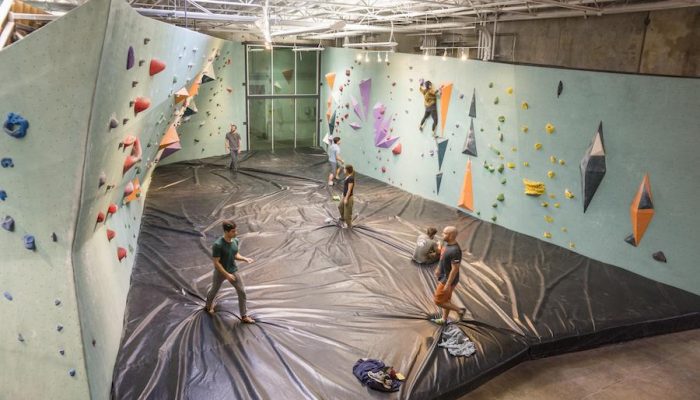 A Seattle-based bouldering gym and a brewery are transforming a nearly vacant industrial building along the Mississippi River just north of the North Loop.

Minneapolis Bouldering Project, which is affiliated with similarly named bouldering gyms in Seattle and Austin, Tex., has signed a lease for 42,000 square feet in Riverside Plaza, 1433 W. River Road N.

The group has already begun a $4 million to $5 million buildout of the gym, and the owners hope to be open this fall if construction goes as planned.

Bouldering is similar to rock climbing, except that no harnesses or ropes are used. The boulders in Minneapolis will be around 18 feet tall and the floor will have 16 inches of padding in case climbers fall. In addition to bouldering, the facility will offer yoga classes, free weights, a sauna, locker rooms and a lounge with Wi-Fi.

Both gyms now have 4,000 members. Monthly memberships are around $68 while daily passes are $16.

“It ramped up stupidly fast,” said co-owner Will Hanson. “Most of our issues come from being so busy.”

Hanson said the quick success can be attributed to the inclusivity and accessibility of bouldering. People with any level of experience can come in without any equipment and be on a wall in minutes. Plus, the shorter walls make it easier to socialize.

“You’re not separated by 50 feet of rope,” Hanson said.

Hanson is the lone Minnesota native of the group. He is moving back to his hometown to open and operate the gym (he and his wife bought a home in Northeast).

The Bouldering Project lease is what spurred a redevelopment of Riverside Plaza, an 80,0000-square-foot light manufacturing complex.

Lee & Associates Principal Chris Garcia brokered the deal. He helped Bouldering Project find a building and then represented Eden Prairie-based Interstate Development on its purchase of the complex in November. Garcia is a now a part-owner of the property.

The Bouldering Project deal also helped lure Pryes Brewing to the complex. That company plans to open a brewhouse and taproom with a patio facing the Mississippi River this summer.

“This will bring tons of jobs to the city,” Garcia said. “More than anything, it’s going to be a totally different recreational option in the Twin Cities.”

The dominant rock climbing company in the Twin Cities, St. Paul-based Vertical Endeavors, also has said it plans to open a bouldering gym, but thus far hasn’t announced a location.