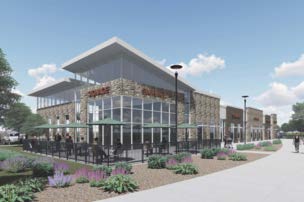 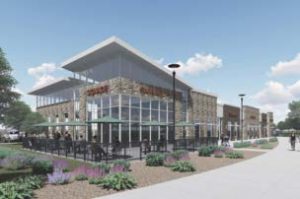 CITY OF RICHFIELD A rendering of Interstate Development’s Plaza 66 retail project, planned at 66th Street and 16th Avenue in Richfield.

Retail development continues sprouting up around Richfield’s Cedar Point Commons, with a third building in the works near the SuperTarget-anchored shopping center off Highway 77.

Interstate Development is pitching a 10,700-square-foot building just southwest of Cedar Point. It will likely have five tenants, with a mix of general retail and food users, including a drive-through coffee shop, said Interstate Vice President Lonnie Provencher.

Provencher said Eden Prairie-based Interstate has letters of intent with tenants for most of the building and plans to break ground this summer. To make way for the building, Interstate is buying and moving four single-family homes along 66th Street, between 16th and 17th avenues.

Unlike many strip malls, Interstate’s “Plaza 66” will put its parking on the back side of the shops, which makes it more pedestrian-friendly, Provencher said.

It’s been more than a decade since Ryan Cos. US. Inc. developed Cedar Point Commons, which also has a Home Depot, Chipotle, Noodles & Co. and several other retailers. Ryan had planned to expand the shopping center, but halted those plans during the recession.

Minneapolis-based Hempel revived those plans up last year, buying the unused parcels from Ryan for a pair of 7,200-square-foot retail buildings. Those buildings are under construction and Hempel has pulled permits for a Cafe Zupas, Panda Express and an AT&T store, said Richfield City Planner Melissa Poehlman. Previous site plans showed Naf Naf Grill and Five Guys Burger and Fries, though permits haven’t been pulled for those.

David Daly and Eric Sheaffer of CBRE Minneapolis are handling leasing for Interstate. Minneapolis-based DJR is the architect.

Insterstate’s proposal won Planning Commission approval and will go before the full City Council on May 24.