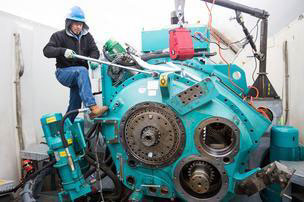 Moventas builds and repairs wind turbine gearboxes like this one in Oregon. The company is setting up a repair shop in St. Paul.

A Finland-based manufacturer of wind turbine gearboxes plans to open a facility in St. Paul, where it is expected to create 20 jobs initially and grow its workforce to 60 within five years.

Moventas plans to open its gearbox services workshop by Feb. 1, it announced in a news release.

The company is nearly done finalizing a deal with the St. Paul Port Authority to lease about half of a $5 million, 58,000-square-foot building that the Port Authority is developing with St. Paul-based Interstate Partners in the Beacon Bluff business park, at 1065 Phalen Boulevard.

“Moventas is an international leader in the alternative energy production field and we’re absolutely thrilled that this Finnish company has chosen St. Paul’s

East Side for their facility,” St. Paul Port Authority President Louis Jambois said in a statement.

The Port Authority met with the Payne Phalen District Council in St. Paul and shared some details of the development,according to a story in a community newspaper, the LillieNews. Crews are expected to begin grading the site next week to prepare for construction.

This will be Moventas’ first service facility in the Midwest, where many other wind industry manufacturers are located.

The company provides service for Moventas-brand gearboxes, as well as other brands on the market. It has similar service workshops in Big Spring, Texas, Portland, Ore. and Cambridge, Ontario.

This is a renewed attempt by Moventas to set up shop in the state.

Moventas announced plans in 2008 to build a 75,000-square-foot production plant with 90 employees in Faribault. It would have been the company’s first factory in the U.S., but the project was cancelled when the wind energy market died down.

U.K.-based Clyde Blowers Capital added the Moventas to its portfolio after the company filed for bankruptcy in 2011.

Moventas now has about 950 employees in 15 countries. A company spokeswoman couldn’t be reached for comment.