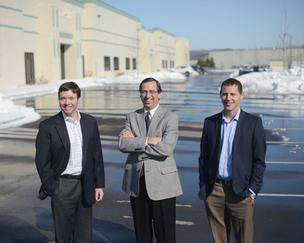 At age 61, Greg Miller, president of the Minnesota office of Interstate Partners, was exhausted and thinking about retiring to Florida to play golf.

He gave it some thought, but ended up recruiting two younger partners, Lonnie Provencher and Eric Simmer, to join the firm and invest in new projects, including a 100,000-square-foot speculative industrial building they plan to start building in South St. Paul this spring.

At its peak, Interstate, a regional development company, had nine employees working in the 12,500-square-foot office building it developed in downtown St. Paul in 2009. The company, which also has offices in Milwaukee and Chicago, shrank significantly during the Great Recession.

Interstate was formed in 2000 by Miller and three other former executives as a spinoff of Wispark Corp., the land development arm of Wisconsin Energy Corp., based in Milwaukee.

Unlike a lot of real estate firms, Interstate didn’t have to give up any buildings to lenders during the recession, mostly because it was able to sell some big assets that were well-leased. From 2007 to 2011, it sold the $90 million Grand Oak Business Park in Eagan, a $125 million industrial portfolio in Chicago and a $65 million building in Milwaukee.

Miller said he and Interstate CEO Francis Brzezinski, who works out of the Waukesha, Wis., office, would have preferred not to sell, but the company needed cash to support its vacant land and meet the increased capital requirements of its lenders.

“It helps to have it when they call,” Miller said.

For about two years, Miller was a one-man shop, focusing on securing financing, starting construction and pre-leasing a new 126,000-square-foot industrial building in South St. Paul at the site of a former stockyard.

Interstate bought the 30-acre site in 2006 with plans for a business park called BridgePoint. The first building was completed last May and has gone from 25 percent to 75 percent occupancy. The largest deal was a 48,000-square-foot lease to First Supply, a Madison, Wis.-based plumbing company that’s moving into the building on Monday from New Brighton.

Interstate plans to break ground in April on a second phase of BridgePoint, a 100,000-square-foot building. Miller is confident Interstate will be able to finance the deal, possibly with the Milwaukee office of The Private Bank, which provided the loan for the first phase.

Interstate also is in the midst of developing a $10 million building in Eagan specifically for Midwest Independent Transmission System Operator Inc., which is moving out of St. Paul. Miller said he’s negotiating deals with a few east-metro landowners interested in co-developing their sites into industrial parks.

To handle the increased work and scout new deals, Miller brought on Provencher and Simmer. Provencher, Simmer and Miller will be equal investors on their new deals.

Provencher, 33, was previously an industrial broker for Cushman & Wakefield/NorthMarq in Bloomington. Simmer, 38, has been running his own small company, Minneapolis-based Keystone Commercial Investments Minnesota, for the past three years. Previously, he worked for United Properties, a sister company to NorthMarq.

“I think it’s a good move for both guys,” said Chris Garcia, a principal at CGC Commercial, an industrial and office brokerage firm in St. Louis Park. Garcia has worked with Provencher and Simmer.

Provencher’s greatest strength is his creativity with deals, and Simmer is “a good numbers guy,” who also has experience running his own investments, Garcia said.

The men bring a good combination of skills and energy that should fuel the firm for the next five- to 10-year real estate cycle, Miller said. “Frankly, at the

end of that and these guys are still in the prime of their careers, it might be a good exit strategy for me, that they become the whole company.”\